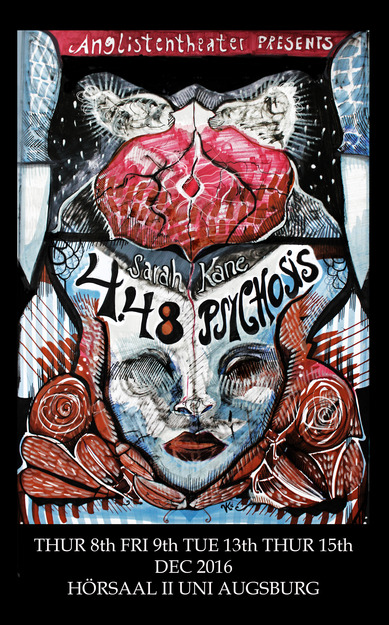 On Thursday 8th December, the AnglistenTheater will premiere their latest play: 4.48 Psychosis by Sarah Kane. eMAG visited their final rehearsal and had a chat with Anna – who plays a young mentally ill lady – and Lotte, who plays one of her doctors.

So this is your last rehearsal before the premiere. Are you nervous yet?

Anna: Not in an apocalyptical way, but a little bit. Actually, I just avoid thinking about that at all.

Lotte: Not really. Even if I forgot my text, I bet no one would notice because of the way the play is structured. I’d actually say I’m more tired than nervous. We’ve had a lot of rehearsals, which gets quite exhausting.

Is it your first time working with the AnglistenTheater?

A: It’s already my third time.

L: For me it’s the second time.

And are you thinking about coming back again next semester?

A: Yes, but maybe just for a small role or as part of the “behind the scenes” team. It is fun, but it’s still work which takes up a lot of time for rehearsals and learning your text.

L: It’s actually the same with me. I’d love to come back, but I’ll be working on my bachelor thesis, so I’m not quite sure whether I’ll have the time.

Since the play is really… let’s say “special”, the way it’s written, was it harder to learn the text than an “ordinary” play?

A: Well, it doesn’t have a lot of dialogue and it doesn’t even really have strictly divided characters and the plot is a bit… hard to find. I’d say it is definitely different from what we see as a “normal” play. The lack of dialogue makes it a bit harder because, for example, if you’ve forgotten a line, there’s no one there to help you, but in the end it’s just text which can be learned by heart like any other play.

L: I don’t really mind it, since I’m particularly interested in poetry.

I’ve read that the play mainly focuses on mental illness and psychiatric treatment. Did that affect you?

A: It was kind of depressing for everybody. After rehearsal we were really drained emotionally.

L: It was definitely exhausting because it’s just not a happy play. If you see it, you don’t leave the theater going like “Haha, that was super funny to watch!”. But overall that’s not a problem, since I’m fully aware that it’s just a play.

I wish you the best of luck, but do you have a personal worst-case scenario for the premiere?

A: I’m afraid of self-fulfilling prophecies, so I’m not gonna answer this! (laughs)

L: Maybe standing on stage and getting laughed at.