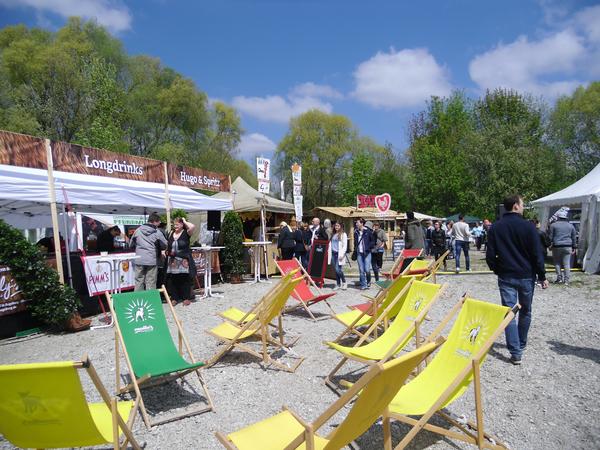 Augsburg really seems to be becoming a food city. In 2016, the city had three food events. Trend & Food Augsburg, which took place at the Kongress am Park between April 15 and 17, was the first. It really had a lot to offer: bars, food trucks, candy, hors d’oeuvre, vegan options and much more. And even though the Kongresshalle isn’t that big, there were a lot of different booths and everybody seemed to enjoy themselves. Whiskey, liquor and moonshine tasting were some of the fun booze-related activities you could indulge in. How about some tiny but delicious cupcakes? Sure! At some – if not most – of the booths, you could use the vouchers you got for paying to get in. This way you basically got all your money back and theoretically the entrance was free (with the early bird ticket at least).

Trend & Food was pretty small, but the bigger event was the Street Food Markt, which took place in May and between September 23 and 25, 2016 at the Gögginger Festplatz. Compared to 2015, there were almost twice as many booths and almost no waiting time at all. Everybody seemed to be crazy about those potato spiral thingies – they were delicious, but we couldn’t figure out if there were bread crumbs on them or not. The smoothie booth was a nice touch. I actually ordered the first Green Bull of the day. The pies, a ton of different versions of hot dogs, BBQ, pizza, Israeli and vegan booths also gave visitors an opportunity to try something new. One of my favorites was definitely the donuts: they looked, smelled and tasted like heaven! And if you were there early, you could easily get a very nice spot on a deckchair and enjoy the sun while nibbling on something yummy and drinking a cocktail, beer, smoothie or just plain water.