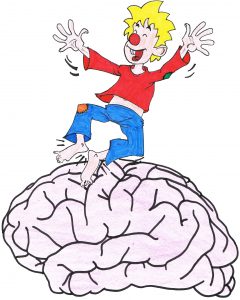 Have you ever noticed someone who moves abruptly, as if they couldn’t control their own body? I bet you have! But usually you’d either look away or you’d try to give the person a furtive look because you’re wondering what they’re doing. Well, I’m one of those people fidgeting around in public owing to a disease called Tourette’s syndrome. As most of you’d probably try to avoid interrogating me in order not to make me feel uncomfortable, I’m going to answer the Top 10 questions I’ve been asked because I want to give you an insight into my life with Tourette’s.

This is, of course, one of the most frequent questions. Science defines Tourette’s syndrome as a neuro-psychological disease which appears in the form of so-called tics, which are involuntary, quick and suddenly occurring movements or sounds. Motor tics are usually way more frequent than vocal tics, but they can also happen in combination. In my opinion, this definition is very abstract, which is why I prefer to explain it differently. Children can understand the illness best with the image of a goblin playing tricks on my brain. However, my favorite explanation is the filter in my brain; our brain sends thousands of commands to the nerves every day. But not all of them are useful or necessary and the filter sorts these out. In my case, the filter leaks, so that my brain instructs me to laugh and at the same time I shake my head – quite confusing, right?

All kinds! From shaking my head or rolling my eyes to clearing my throat or hiccupping or twisting my legs. Sometimes a certain tic doesn’t occur for a year and then – all of a sudden – it reappears, but even worse than before. Or it disappears forever. In principle, my tics always vary and from time to time I ask myself how my body is actually able to carry out such movements or sounds. And although it might look funny, my tics can be very painful; there was a time when I used to dislocate my thumb so I had to wear a splint for weeks.

3. When do your tics occur?

Whenever they want. Usually, they get worse when I feel stressed in a certain situation or place or when I’m surrounded by strangers. But very often they occur when I’m totally relaxed, as if my brain was getting rid of all the tension, and my tics unload. In periods like this, I need to do less in general because the tics occur in concentration, which completely exhausts me. The funny thing is that sometimes, I’m tic-free for several days and during the night, I’m totally calm as well. So, as you can see, Tourette’s has a mind of its own.

4. Can’t you control your tics?

I’ve already partially answered this question. So, I can hold my tics back for a short time in order not to attract too much attention. The only problem is: whenever I suppress a tic, it’s really tiring, and comes back much worse. That’s why I usually let my tics come as they do because suppressing them has always had the opposite effect to what I wanted to achieve with it.

5. How does having a tic feel?

That’s hard to answer since I don’t know a constant state without Tourette’s. But you could probably compare it to the feeling before you hiccup, when the pressure slowly rises from the throat before it happens. And this light pressure persists the whole day. However, if small tics like rolling my eyes occur, I usually don’t even notice them anymore.

Yeah, Tourette’s is mostly associated with vocal tics, especially swearing. And in some rare moments, I think that it would be so great to hurl an insult at a grumpy waiter and to even have a ready-made excuse for it. But actually, only about 20 % of those affected suffer from this severe form of Tourette’s. And I’m very happy to be one of the other 80 % because so-called ‘coprolalia’ is emotionally trying and very restricting.

7. What do you think about Tourette’s jokes?

That’s quite a question! I think nobody wants to be asked whether they’re disabled. You can probably imagine how shocked I was when I heard this question for the first time. This was actually the moment I realised how conspicuous my tics really are. Of course, I tried to stay calm on the outside and keep my poker face. But on the inside, a part of me, the part that believed that I’m as normal as everybody else, just broke. Naturally, I tried to convince myself that these people simply don’t think about how their words can hurt people. But after this event, I cut myself off from the outside world for a while and it took me a long time to get over it.

That’s always kind of a tricky question. As I’ve already said, my tics vary in their manner and frequency. Minor tics like rolling my eyes occasionally don’t have a big impact on my daily life. However, if I’m stressed or nervous, I also combine tics. I start rolling my eyes and at the same time I shake my head vigorously and hiccup. Sometimes, my motor tics are so frequent and heavy that I can’t drive since I can’t have a constant eye on the traffic. At such times, my mom or friends drive to minimize the risk for others. And there are some things I can’t enjoy like others do:  a rush of adrenaline or alcohol aren’t good for me and my tics get unbelievably strong because my brain is overtaxed with so many stimuli at the same time.

Unfortunately not. I’ve been suffering from Tourette’s since the age of four and believe me, I’ve visited a lot of doctors in my life so far. Of course, there are medicines to suppress the tics, but they usually have a strong sedative effect as well. From time to time, scientists conduct surveys about new ways of healing, like a medicinal cannabis spray that helps sufferers to relax. However, all these drugs have very strong side effects so that I’ve never tried any. I think as long as I’m not suffering from one of the severe forms of Tourette’s, I’ll just try to get along and find other, more natural ways to relax.

These were my Top-10-questions about Tourette’s, answered by someone affected and not by scientists just giving theoretical explanations. I really hope that my article has uncovered the mystery of this disease so that the next time you see someone making weird movements or sounds, you won’t freeze in total shock or pure fascination but remain relaxed and open-minded. Because as you know now, people like me only have a goblin in their head fooling around.