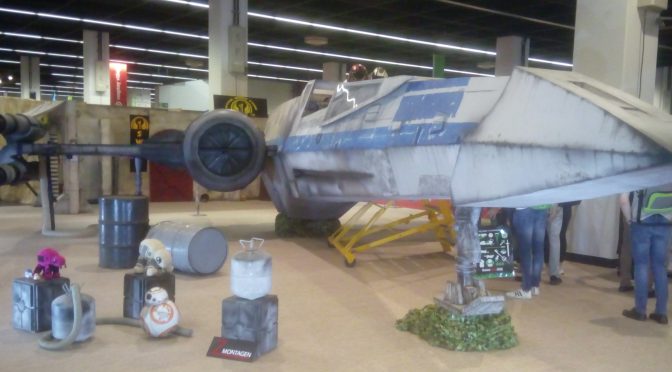 The Heart of Gaming

Muslims have Mecca. Metalheads have Wacken. Gamers have GamesCom. Yes, it was this time of year again. Gamers from all around the world have flooded the exhibition halls of the Koelnmesse in Cologne for the 11th time now. But not only them but also developers, publishers, cosplayers and so many more that hold gaming dear to their hearts. On an area of 218,000 m² – roughly 30 football fields in size – 373,000 nerds have come together. Me being one of them…

This year has been my third year in a row to attend GamesCom and seeing how my favourite games publisher, Activsion Blizzard, did not have a stage or booth I decided to go there rather unprepared. I had no list of things I desperately wanted to see. (I’ll admit, I would have sold my soul in a heartbeat to get to play Cyberpunk but alas, the queue was so quickly filled up every day that I decided it wouldn’t be worth the wait.) So my first day pretty much consisted only of strolling through the exhibition area, admiring some of the work developers have put into their stage presence and was blown away by some of the amazing cosplays – albeit a lot of it from League of Legends. The sheer time energy and dedication people must have put into some of these outfits is stunning. So I sat there in front of the ‘Cosplay stage’ until the cosplay dance off started which was hilarious to watch. But in a good way. Major props to everyone who took part in this event and so gladly embarrassed themselves!

But this was only a really small part of what has been shown. There have been entire halls filled just with merchandise for all sorts of games, mangas, comics and even gaming soundtracks. Another hall was dedicated entirely to indie games where smaller studios or sometimes even one-man-projects showcased their games on a single computer. Ironically enough, I got stuck on Nanotale, the successor to Epistory. A game that is entirely about typing words which will then appear in the game world so you can continue onward on your journey. I guess writing is following me even into my video games. But there has been one thing I low-key had been excited for: the advancement on VR. Seeing how Valve released their latest headset just a few weeks ago with some major improvements on tracking, I was curious about its competition. At the GamesCom in 2017, there was an entire hall dedicated to VR, headsets, games and programs to be showcased to the masses. Queues so long you had to sign up a day before for a mere 5 minutes of playtime. Fast forward to 2019 and you would only find a few indie developers or universities that specialize in game development with some neat little VR features. Walking on a plank with a simulated abyss beneath you, for example. Back then I already got into some heated debates with my fellow gaming friends about whether VR is the future of gaming and I always saw it just as a gimmick but nothing more. I’m a bit sad now that I might have been right but who knows. Maybe it’s just the calm before the storm.

But that’s not what most of the people have been there for. Apart from Cyberpunk by CD Projekt Red, the other major titles represented there have been Monster Hunter: Iceborne – the upcoming expansion to Monster Hunter World – as well as Borderlands 3. Impossible for a regular mortal to get into any of these exhibition booths unless you’d want to wait for 10 hours straight.

I had some time to kill on my second day to see some presentations by ‘THQ Nordic’ which I mostly watched because they have fantastic stage presence and really showed their games and interacted with the crowd. So in the meantime, I had dropped by a Super Smash² eSports-tournament by Nintendo. Damn, these people are good. For all the uninitiated: eSports is the term given to tournaments and the scene surrounding sporting events that take place entirely on virtual playgrounds. While still being chuckled about by most people, there are reports within the industry that by 2022 eSports will have grown to the size of the NFL in terms of people following it and money spent on the events by sponsors. The comparison is quite apt in my opinion. There are already tournaments like ‘The International‘ that can be compared to something like the Super Bowl. Back in 2011, the first ‘International’ was being held by Valve for the game DotA 2³ with – for that time – an astounding amount of 1 million dollars in price money. This was groundbreaking news for the scene as for the first time ever such an amount of money was thrown at a tournament and from there on it only continued to grow. In 2019, the price money reached a staggering 34 million dollars. And within the fanbase, it already has reached the status of something like the Super Bowl. A lot of viewers and supporters don’t actually play the game anymore themselves but still are excited as ever for that one week every year to cheer for their team. Yes, I’m talking from experience here.

As we are already on the note of America here, I want to tackle a more serious topic. Video games are constantly under fire by mass media after killing sprees. Usually criticized by politicians, Donald Trump has been the most infamous recently to do so after the attacks in El Paso in which 22 innocent people have been killed; several more injured. In a response, Trump gave a speech in which he blamed video games as a reason for domestic terrorism.“We must stop the glorification of violence in our society. This includes the gruesome and grisly video games that are now commonplace. It is too easy today for troubled youth to surround themselves with a culture that celebrates violence. We must stop or substantially reduce this.”, so Trump in his speech 5th August. I am sick of this nonsensical rhetoric that has been proven wrong so many times now and neither will I let a talking orange with a wig destroy part of my gaming culture. In a country where video games are as easily obtained as real weapons of war, you can not go around spouting these idiotic paroles just to defend the biggest lobby in your country. Lobby-ism is all that Trumps politic has been about for the past years and he shows no different face in this matter.

But let me tell you: It’s not the pixel-guns on a screen that kill people. It’s the actual guns sold in American stores that do. So start policing that shit maybe?

Should I give you an example on how ludicrous this has gotten? After the aforementioned shooting that happened in a Walmart, the chain decided to remove “all signs, displays or videos that depict violence in an internal memo.” This decision led to all video games, consoles and movies above a certain age rating to be removed from the stores while happily continuing to sell guns. (Source: https://www.npr.org/)
This whole discussion that is being stirred up by politicians so eagerly has only one purpose: To move attention away from the actual problem. The guns.

1: Cosplay = a showcase of an anime, manga or video game character in costume and behaviour.
2: Super Smash = A popular fighting game by Nintendo with playable characters from many different games. Very popular as a casual party game with a massive professional scene behind it for years now.
3: DotA 2 = short for Defence of the Ancients 2. A videogame by Valve Entertainment that belongs to the genre of Mobas in which you take on the role of a character together with your team and try to defeat the base structure of the enemy team.

Text and pictures by Tobias Lorenz