The closing of libraries in small towns and plenty of free digital copies of books that can be accessed online suggest hard times for libraries. However, thanks to a new concept, libraries are well alive and flourishing in some bigger cities. This new concept attracts a higher number of people to libraries that don’t necessarily come there with the objectives to read, study, or work traditionally but to spend their time differently. When a pioneer library opens in the morning, some visitors are already waiting outside, which suggests difficulties in finding seating space for everybody else coming to the library throughout the day, turning a simple library visit into a Berghain experience. Depending on the time, of the day one can’t even be sure of granted entrance anymore.

Libraries – the New Place to Be

As stated above, the traditional purpose of libraries has already shifted in some places. There are still visitors who just wish to read, research, or work in silence. Some visitors, however, are coming there with their luggage, waiting for their next departing train or flight, others are there to meet acquaintances near the seating area, and some are there to have a place to go after school or work. The libraries’ staff do not always dread these changes. Instead, they welcome the guests with open arms, even if that guest isn’t coming there for the books or favorable working environment. Some even go so far as to introduce changes to meet the people’s needs, such as reducing the number of physical books in their libraries to make space for more seating areas.

The question arises if these changes to the traditional concept of libraries in some places will affect the future situation in Augsburg with its public library, as well as the library on campus.  It is not clear if there is the option to create additional seating areas to offer space for the growing number of visitors the new trend attracts. It’s also unclear if the staff in charge are willing to introduce the respective changes to follow a new approach, as well as if the people would appreciate a more progressive concept concerning the city’s libraries. Let alone if the library on campus became more of a place to be than to research, work, or study, that would consequently make it harder for the university’s students and staff to work effectively in the library.

So while it has shown that a new concept introduced at the right place at the right time can positively affect the present situation, it should not be forgotten that everything comes with the respective pros and cons. It may therefore be possible for bigger cities to attract more people to libraries with this approach; however, this doesn’t guarantee for this concept to work out in every context or for every situation, as for example the one on campus.

Since I was a little kid, my step dad took me and my family on a holiday to Slovenia every summer. On these holidays, my passion for whitewater kayaking was born. Now, around 20 years later, I can still be found in a boat on a regular basis. And here’s the reason for why I moved to Augsburg last year: the Eiskanal. But what exactly is the Eiskanal? I’m often quite surprised when people living in Augsburg who don’t have a single clue of what this thing is.

So what is it?

Well, as you might have guessed by now, the Eiskanal is somehow related to whitewater sports. In fact, it’s an artificial whitewater river that was built for the Summer Olympics in 1972. Up until today, the Eiskanal is a very famous spot for kayakers coming from all parts of Germany and even for non-Germans. People use the water for canoe slalom, where you navigate your canoe through a course of hanging gates on river rapids really fast, but you can also just ignore the gates and try to master the rapids as expertly as possible, or you might even see stand-up paddlers (I guess you know what this is) trying to survive the rapids of the Eiskanal. And one more thing: the Eiskanal will even host the canoe slalom world championships in 2022.

In my case, I prefer being in a boat without manoeuvring it through the gates as you do it in canoe slalom. To be honest, these gates simply annoy me and I just try not to get hit by them. For me, the Eiskanal is simply a training course for being prepared to master the waves on natural rivers in countries such as Austria or Slovenia. The boats I use are made of plastic, in contrast to the slalom canoes, which consist of carbon. Being made of plastic instead of carbon obviously makes the boats considerably cheaper, and – highly important for the natural rivers – a lot more stable and resistant against getting punctured by rocks.

Being on natural rivers is not comparable at all to the artificial rivers, such as the Eiskanal. You have the breath-taking scenery around you, which makes this sport so outstanding. Also, you might feel like being on holiday, even when being on the river for only one day. So you can completely forget your worries from everyday life. Being surrounded by nature is also quite calming for the stress the sport often brings. Almost before every new rapid, you can get really nervous and have to discuss with your group how to best run the rapid so you won’t have to roll up again, or, in case that doesn’t work, even get out of the boat and swim. Seeing the beautiful nature around you at this moment can have such a positive effect and encourage you for paddling forward.

Highlighting the pro’s of natural rivers in contrast to the Eiskanal was definitely not meant to talk bad about the Eiskanal. Instead, kayaking on the Eiskanal is the best training and preparation for going on the natural whitewater rivers. You know that the rapids are always the same, you can practice on the same spot again and again, and nearly always, there is someone around who could help you in case of an emergency. If you struggle to get out of the water or to get your boat out again, there will be another person in the water who can help you, or if not, then there are always people by the water. One last note, if you don’t feel like trying to kayak now, then one first approach might be to just go to the Eiskanal and watch the others in their boats. The Eiskanal is surrounded by a nice terrace-like green field, which is used by people a lot, especially in summer, for just relaxing in the sun, having a picnic, or taking a break from a bike ride. And why not just let your eyes wander towards the kayakers mastering the waves on the Eiskanal?

-3° Celsius when I was riding my bike back home after having watched the performance of Electra by the Anglistentheater. But I couldn’t feel the cold, my thoughts captured by an echo of what I’d just listened to, watched and felt.

I won’t spoil your experience of watching the play by giving away the plot. What I do want you to know, though, is: this performance of Nick Payne’s Electra is filled with emotions, passion and love for detail. Authenticity of all actors and actresses makes this performance so realistic. The focus is on acting, which is still pleasingly accentuated by fitting music or, in many cases, the actors and actresses humming. There are no exaggerated light effects, no overdone make up, only people, who enjoy what they’re doing: being on stage. I don’to criticize either sound, light effects or make up. I just think that this is what fitted the play and performance just perfectly.

So why go and see the play? The performance of the Anglistentheater did exactly what a performance is meant to do: it left me thinking. Thinking about what is right or wrong. If revenge can be a way of coping with rage or grief. Why people want to take revenge. How it feels to loose your father murdered by your mother. Why humans are cruel. That’s just what came to my mind after seeing the play. Even though your thoughts might be completely different, I still hope you enjoy this performance as much as I did. And maybe it leaves you with a tear in your eye, a smile on your face or your mind coming up with questions you’ve never asked yourself before. Either way  it is worth your time to go and watch it!

Their shows take place on Thursday, the 5th of December, Friday 6th, Tuesday 10th and Thursday 12th at 8.00 p.m. in the Hörsaal 2 here at Uni. Tickets can be ordered online with the order forms or at the Taschenbuchladen Krüger located near Königsplatz. 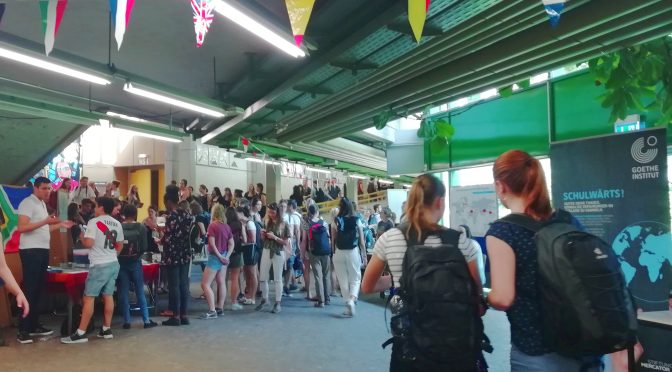 I have been studying at the University of Augsburg for over two years, but I’ve never heard of International Day. As somebody that’s highly interested in other countries’ cultures and especially their food, it’s safe to say that I was excited to be part of this event for the first time.

The biggest part of this event is, of course, the presentation of countries from all over the world, done by students that are either natives or have lived there. Since our table was right next to India, and I was very intrigued by the delicious-looking food that people were handing out right next to us. I decided that the “Asia corner” would be my first stop. My first time walking through, I decided to have a look at everything before starting to talk to people. The people from the Indian table, apart from having great music and food, also offered henna tattoos, which looked absolutely beautiful. Right next to them, I was immediately offered some rice from the nice man behind the Pakistan table. I continued my journey looking at every country from Japan to China over to Korea. I also met quite a lot of people interested in Australia and New Zealand. Beside their curiosity in vegemite, they also wanted some information on studying abroad and on what to look for when applying. Right at the entrance, I saw a flock of people collected around Georgia. When I looked closer, I realized what was keeping them: some very nice-smelling food.

But what’s the one thing that attracts students more than food? Alcohol! Unfortunately, I wasn’t able to try any of it but people looked thrilled at the shots offered right next to “HS I”. Exams are getting closer and what better way could there be to prepare yourself? These are just some highlights that I saw, but these weren’t even half the countries you were able to get a glimpse of. So all in all, if you missed this time, make sure to visit next time, because the people you meet are delightful. Here’s a big thank you to everyone that put so much effort into showing us their home or favourite travel detination.

What else was there?

Not only were you able to get an insight into other countries’ cultures but you could also meet experienced people who were ready to reply to your questions. Whether you consider studying or working abroad, and no matter which continent you consider going to, these people are there to help you. And, last but not least, there was… us. We were there, too, to spread the word about eMAG. In case you missed out on this one (like I always did), make sure you follow our social media accounts where we post regularly about events on and around campus:
Instagram: @emag_ua
Facebook: @eMAGUniAugsburg