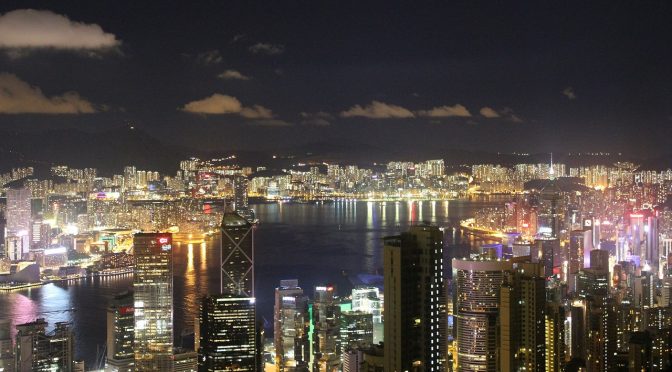 The lovechild of communism and capitalism?

Yes, it’s been a while and yes, I said I wanted to work on more reviews over the summer break. As per usual my plans came to a hold due to some family stuff. And just as I came back and started working on one of said reviews, I stumbled upon this gem of a disaster…

Part of the following topic would usually be something I don’t report on or write about: the ‘Revolution of our Times’ in Hong Kong – a movement started by students in protest to the supposedly non-democratic elections held in Hong Kong even though the people were promised fair elections. There is a reason as to why I would avoid a topic as this because I am usually not too interested in politics which has more to do with my disgust towards lobbyism more so than anything else. But this movement has crept into a topic I very much enjoy covering, which is gaming. So how does all of this connect?

Back when I decided to write about gaming – long before my time at eMAG – I figured it would be mostly limited to a few reviews here and there about some indie games. But the more you get invested in a topic, the deeper you dig and not long before the whole cesspool of drama within the industry and scene would unfold – topics for articles for another time when I’m bored. But I have never quite lost my interest in the gaming scene, as you can probably tell from one of my last articles. I mentioned that one of my favourite companies there is Activision Blizzard. Years ago, when it was still only known as ‘Blizzard’, their major contributions to the gaming world consisted of the Warcraft, Starcraft and Diablo series. The company was known to have high standards in regards to development; trying out new things but always keeping the consumer their first priority. A goal that was highly regarded by the community and has always been at the heart of the company so much so that outside the Blizzard headquarters you can see a statue and three plaques that read:

Back in 2012, with the release of ‘Diablo 3’ the company probably hit the biggest controversy with the introduction of what they called the “Auction House“. A virtual place in-game where you could spend money to buy gear off of other players to help your own character – with a cut of the money going directly into the company’s pockets. In theory sounds like a really cool idea, right? It all depends on the implementation and that’s when Activision Blizzard first poked the bee hive that is their own community and comments on their greediness arose. The whole idea of directly buying power in-game with your hard earned cash seemed ridiculous because why would you even want to spend money to basically avoid playing the game as the whole point of Diablo was to find gear for your character. And that’s where the dilemma of being consumer or community-friendly and being a corporation at the same time first started to peek for Activision Blizzard. The chances of getting any sort of loot where so abysmal that if you wanted to complete the game many people felt like they were forced to buy gear.

A few years later a new hit struck the market: Hearthstone. And the trend continued. With Hearthstone being what it is, a digital card game, a lot of players voiced their unhappiness after a while as to why it was necessary to have so many unnecessarily bad cards in their – just inflating the pool of potential cards to draw from with each booster pack and in turn making it less likely to get the cards you want and need to play competitively. I’m not going into detail here about the monetisation system behind the games and how the booster packs are basically just loot boxes because that will be an entire article in and of itself. It shall serve simply as a showcase of how the consumers have directly been affected by the changes over the last 2 decades even by one of the companies known to be the most consumer friendly.

There have been more subtle changes as well over the years, though. Some of these changes more obvious than others to the players, the consumers and the critics. The most important little detail here is most likely that a Chinese gaming company called Tencent bought up 5% of Blizzard’s stock in 2007. Combine that with the ever growing business potential that is growing in China and you see why a largescale company would have a vested interest in keeping their Asian shareholders happy. And that is exactly what Activision Blizzard tried last week when during an interview with the professional gamer ‘Blitzchung’ who won in a tournament – ‘The Grandmasters Asia-Pacific’ of aforementioned Hearthstone. The games as well as the interview were streamed live over the internet. Blitzchung went on in his interview to ask if he could say some lines of his own. The interviewers very reluctantly agreed and Blitzchung went on to speak out for the Hong Kong movement:

Something that I would assume strikes most of the Western audience as something totally relatable. And I get that there are cultural differences which is why the casters and interviewers probably saw it coming and were not too happy to be associated with said statement. The response by Activision Blizzard followed within minutes. The livestream went down and later on it was announced that the official winner Blitzchung would be stripped of his well-earned title, the prize money and the right to now on compete in the tournaments to come. The casters were struck with a similar fate in that their contracts were terminated immediately followed by a very clear statement to the public (taken from rockpapershotgun.com)

Hearthstone’s official Weibo wrote that they “express our strong indignation [or resentment] and condemnation of the events” and “will protect [or safeguard] our national dignity [or honour].”

While the Western audiences got the bare minimum excuse of a legal statement within the rules of conduct for the tournament in which Blizzard hinted at a paragraph that explains they kept the right to remove any player that damages the company’s image (taken from blizzard.com)

“Engaging in any act that, in Blizzard’s sole discretion, brings you into public disrepute, offends a portion or group of the public, or otherwise damages Blizzard image will result in removal from Grandmasters and reduction of the player’s prize total to $0 USD, in addition to other remedies which may be provided for under the Handbook and Blizzard’s Website Terms.“

There is no doubt what image could potentially have been damaged here. The image in the eyes of the Communist Party of China. I guess it is important to know here that the Communist Party is known to censor content they might dislike on a whim. Don’t believe me? They banned Winnie the Pooh because of comparisons made to their president Xi. Banning an entire video is the least of their problems. There is an entire procedure for gaming companies that they have to undergo before their product will be listed for the Chinese market as far as I know. So a company as Blizzard that tries to make as much cash as humanly possible with Asian shareholders on their board has no other interest here than trying to please the Chinese market that is just such a lucrative opportunity for any company nowadays.

So I definitely have to give Activision Blizzard credit where credit is due. They certainly still uphold their value of „Thinking globally“ albeit maybe oriented a bit too far to the east currently. But they seemed to have censored their own ideas of Leading Responsibly or making Every Voice Matter anymore.

This article should really only serve as a quick introduction to what is happening here with the American corporations and the Chinese censorship that is creeping into all sorts of media. If I somehow managed to get you interested in what’s going on here, have a look at some of the professionals’ works like
– Jim Sterling’s Jimquisition on this topic on YouTube
– RockPaperShotgun
– IGN
for more news on the gaming related side of things and basically all big news outlets for the Hong Kong protests directly or Amnesty International. The organisation focusing solely on Human Rights worldwide.

Addendum: After I had been done writing this piece and had everything set up to post it, there had been more news on the whole topic which I thought would be worthwhile including. In particular, the US congress agreed on writing a letter to the CEO of Activision Blizzard, Bobby Kotick, in which it stated:
“We write to express our deep concern about Activision Blizzard’s decision to make player Ng Way Chung forfeit prize money and ban him from participating in tournaments for a year after he voiced support for pro-democracy protests in Hong Kong. The decision is particularly concerning in light of the Chinese government’s growing appetite for pressuring American businesses to help stifle free speech.”
Seeing how the US congress or any government have never really showed any concern for what happened in the gaming industry (with a slight movement in the right direction towards loot boxes, to be fair) it came quite surprising to see quite a few members of the congress speak out and sign this letter; namely: Ron Wyden, Marco Rubio, Alexandria Ocasio-Cortez, Mike Gallagher, and Tom Malinowski.

Text by Tobias Lorenz
Picture by Kevin Muto from Pixabay