Since I was two years old, I have been to the North Sea at least once a year, therefore this area is like a second home to me. Almost everyone has been to the North Sea of Germany at some point in their life, but most people don’t know much about the actual lifestyle of this North Frisian area, probably also due to the fact that most traditions are celebrated outside the school holidays when most tourists are visiting the area. That’s why I invite you on a journey through a whole year of North Frisian customs.

North Frisia is the northernmost district of Germany. It is located within the German state Schleswig-Holstein and includes the mainland area from the town Hattstedt-Schobüll up to the German-Danish border and also the North Frisian Islands Föhr, Amrum, Sylt, Helgoland, Pellworm, Nordstrand and the Halligen.

We assume that the custom called Biikebrennen goes back to the Middle Age where it was used to drive away evil spirits in order to save the new seeds. Later, in the time of whaling, it served to send off the whalers. Biikebrennen is celebrated on the 21st of February. During the week beforeeach village builds up a huge stack of wood, mostly out of old Christmas trees and other garden waste, which is burnt down in a celebratory ceremony with singing, performances or poems presented in the North Frisian dialect. Traditionally, green cabbage is eaten afterwards.

At the end of April or the beginning of May, the Brent goose days take place. At this time of the year, about 80,000 brent gooses take a rest in the mud flats. It is mainly celebrated on the Halligen with guided tours, lecture series, boat trips, mudflat hiking tours and play activities for children.

The Cabbage days of Dithmarschen is a two-weeks celebration of the superfood cabbage which takes place at the end of September. Stationary elements of these days are the first cut of the cabbage harvest, city festivals, craft markets, cabbage workshops, festival marquees, the cabbage slice championship as well as the cabbage race in Marne.

Another custom is the setup of the “Jöölboom“, also called Frisian tree, which is a variety of Christmas tree. It consists of a small wooden frame with a circle of green branches. Inside the circle, the frame is decorated with figures out of salt paste that represent a pig, a cow, a sheep, a horse, a rooster, a sailing ship and a mill. At the bottom of the frame, we see Adam and Eve under an apple tree with a snake. Other decorations can be natural products such as apples, raisins or prunes. The Jöölboom is mostly placed at a window or on a table in the living room.

The last custom of a year is the one of the night of New Year’s Eve; on the Halligen it is called “Rummelpott-walk”, on Föhr “Kenkner”, “Hulken” on Amrum and “Masked walk of Omtaaceltics” on Sylt. Groups of friends who are dressed up, go from door to door, sing songs accompanied rhythmically of their “Rummelpott”, which is a type of drum that had its heyday in the 15th to 18th century. In return for their music and performance the group receives apples, baked products or other sweets. Groups of adults often get a glass of liquor instead of sweets.

These are the main North Frisian customs of a year. I hope I could give you a new view on this area and its culture; And who knows – maybe you will have the chance to experience one of these customs one day! 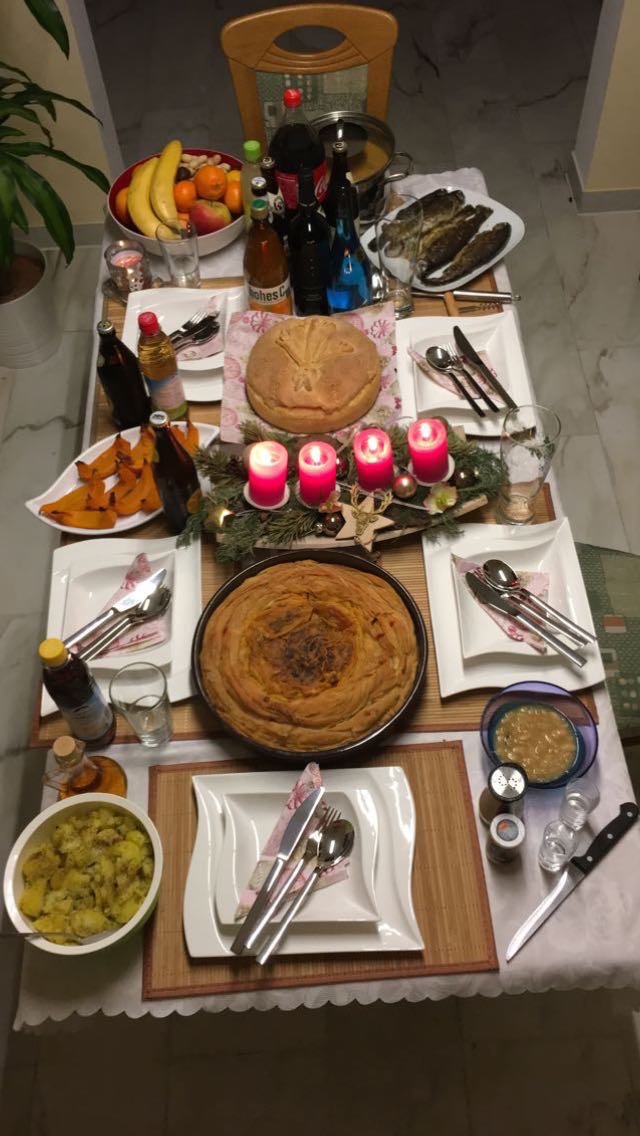 “Merry Christmas” is a phrase I would typically say in December as me and my family celebrate Christmas on the 24th of December, just like every other Christian families does, right? Well, at least I thought so until I got to know my best friend. She and her Macedonian orthodox Christian family celebrate Christmas on the 6th of January. With the help of her real life experiences, I want to illustrate some background information and traditions of a Macedonian orthodox Christmas celebration in Germany.

What is the orthodox church?

The orthodox church alongside roman catholic and protestant church form the three main Christian groups. Orthodox beliefs don’t differ in many ways from the other two, but it is divided geographically e.g. to Eastern and Oriental Orthodox Church. Those do have theological differences within because this belief forms partly from traditions which differ around the world, even though the main beliefs in Jesus Christ as the embodiment of God and his reincarnation, crucifixion and resurrection, stay the same. The Eastern Orthodox church is again subdivided geographically, rather than divided by nations and all churches are either autocephalous (have their own head) or autonomous (self-governing). They still go by the Julian calendar which explains the time differences to our Gregorian calendar.

The relatively small Republic of North Macedonia shares borders with Serbia in the north, Bulgaria in the east, Greece in the south and Albania in the west and is therefore landlocked in the eastern part of Europe. The Macedonian orthodox church is a belief which about two-thirds of the North Macedonian population professes, but it isn’t recognized autonomously by all of the other churches.

The orthodox church puts a lot more emphasis on family and Jesus than the typical German Christian family. When I was a kid, Christmas was mainly about the presents and good food, but as my friend told me, her family doesn’t exchange gifts at all on Christmas. However, food is an important part in their traditions as well. In the time before Christmas, they fast, which means in this case following a vegan diet. Fish, however, is still allowed in this diet and the fasting lasts up until and including the 6th of January, so effectively their Christmas Eve.

Another important tradition is the coin in the bread. They put a coin in the bread dough and when it’s time for dinner the bread gets separated between the family members, including a piece for Jesus and Maria and other people or things that are important and loved by the family. All the bread must be eaten or else it allegedly means bad luck and whoever finds the coin in their piece is to have good luck during the next year. If, for example, the kid gets the coin, he or she also gets a little money from the parents and if the coin is for example in the piece for their house, the family is supposed to buy or do something for the house, like giving it a fresh paint or buy some sort of accessory for the house.

A very interesting aspect of their dinner is that once a person sat down at the table, they are not allowed to stand back up or if they do and then sit back down, they are not allowed to eat anymore. Because of that, the family gathers everything they might need during dinner on the table before sitting down, which always ends in an awfully full table, as my friend states.

What does it feel like to celebrate Christmas later than all of your friends?

In this section I can only speak for my friend who told me all of this and I know that it is probably different for everyone experiencing it. First of all, she states that celebrating later has pros and cons. She never has to argue about which family dinner to attend with her roman catholic boyfriend, as they have separate dates for celebrating Christmas and can subsequently simply do it twice. Generally, she says that when it comes to the 6th of January, she is usually not in a festive mood anymore because all of the people around her already throw out their Christmas trees and are done with the festive season. It sometimes feels weird to still celebrate Christmas. Also, because it is usually the last day of the holidays, her parents have to work the next day and she has to attend to university the next day, they only have one day to celebrate and almost no opportunity to visit relatives the following day like I have when I celebrate on the 24th.

After all, please don’t forget to wish your orthodox friends a Merry Christmas on the 6th of January, I know that they will appreciate your consciousness about their culture very much!