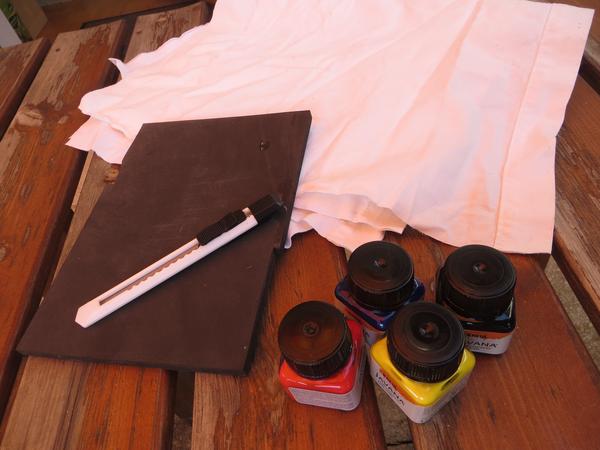 – A towel, it says, is about the most massively useful thing an interstellar hitchhiker can have. –

( Douglas Adams, The Hitchhiker’s Guide to the Galaxy)

Today is 25 May, which means it’s Towel Day! Why should we celebrate towels? Well, I believe Douglas Adams could have given a more than satisfactory answer if he was still alive.

Actually, it’s thanks to him that Towel Day came into existence in the first place, as it’s celebrated as a tribute to the author’s famous book The Hitchhiker’s Guide to the Galaxy. The day was first celebrated two weeks after Adams’ death in 2001 and refers to the phrase that “a towel is about the most massively useful thing an interstellar hitchhiker can have”. Therefore, fans all over the world celebrate towel day by carrying a towel with them wherever they go that day. If you want to join in the celebrations and you want to have your own special towel, then here is a fun tutorial on how to make stamped tea towels: Firstly, grab your bed linen and lay a tea towel on top. Then outline the shape of your towel and cut it out. Now draw your designs on the foam sheet and cut them out with your cutter. You can make whatever shapes you like, but if you’re as bad as drawing as I am, geometric shapes are just fine 😉 Then cut out a small piece of foam and glue it to the back of your cut outs as a handle for your stamp. Now cover the stamp with paint and start stamping your towels. Once you’re happy with your towels, allow the paint to dry and iron them afterwards in order to prevent the paint from coming off when they’re being washed. Now you have your perfect towel for celebrating Towel Day, but of course, you can just use it as a regualar tea towel as well. I hope you have fun crafting and always bear in mind: don’t panic!