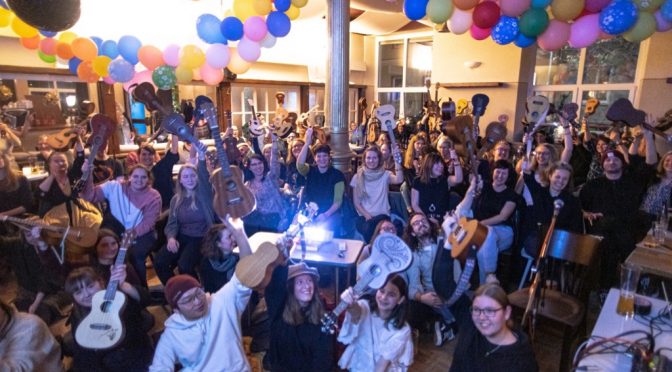 Yes, you have read the headline correctly: The following isn´t about the classic karaoke, which in particular takes place in Irish Pubs after everyone had already had two Guinness. This event takes your bog-standard karaoke to the next level by adding Ukuleles into the mix and has already become the new secret tip in Augsburg: Kara-Uke.

Replace the karaoke machine by motivated guests with their ukuleles, and you basically have the perfect setup for a fantastic Kara-Uke night. Join this with readable chords and lyrics projected to the wall with a projector as well as the the motivated and guitar-loving Benni, inventor and moderator of the whole, and I can promise you that you will have the perfect Kara-Uke night.

No ukulele? No problem! The more voices, the better.

At the beginning of this year, the crowd favorite Kara-Uke suffered from the Corona-lockdown just like all the other activities requiring the encounter of a group of people and had to take a compulsory break. But now that more people are finally allowed to meet again, it´s back – and it seems to not have lost its popularity at all. July is the month of the great Kara-Uke restart!

And let’s face it:  Now that you were sitting around all day, I´m sure that at least some of you have used their free time  to practice some of those instruments that have been long forgotten in the corners of your room. Put those skills to use in this event!

The number of people has to be kept limited, which is why the normally free-entry event had to “sell” tickets – and sold them out in less than 2 days. Fascinated by the success of this creative event, I got intrigued to know more about it and had to ask Benni about a few things that I was desperate to find out.

HOW DID YOU COME UP WITH THE IDEA FOR KARAUKE?

Benni: Actually, KaraUke wasn’t my idea. It’s an event that takes place all over the world in different countries and cities. Michael Dannhauer, Jakob Mader and I are just the guys that brought KaraUke to Augsburg.

When Michael was in Australia 6 months ago, he took part in a similar event in Brisbane, where people met in a cafe with their ukuleles. The organizers had a projector and a linen cloth set up, so people could see the songs with all the lyrics and the chords. Then everybody started to play along and sing together. It sounded so easy to me that I thought: Okay, let’s try this in Augsburg. Maybe the people here will like it as well. And they did.

WHY DO YOU THINK THAT KARAUKE IS SO SUCCESSFUL AND WHAT DO THE PEOPLE VALUE ABOUT IT?

Benni: Everything about KaraUke is simple. The instrument – the ukulele – is tiny and cute, and everybody can learn it really fast. You don’t have to practice it as much as other instruments and very quickly you get a feeling of success. With 3 or 4 chords you can play almost any song throughout pop history. When people visit a KaraUke event for the first time and can’t hold up with the chord changes for example, they can also just sing along. They are happy when the C-Chord is coming over and over again and in between they pause, and have a good time singing with all the others.

It’s really exciting to see, that this little instruments brings so many different people together. No matter where you come from, how old you are, or if you have ever played music before, it doesn’t matter. KaraUke is an event for literally EVERYONE. And because it is for everyone it’s always for free. We collect donations where everybody can give as much as they want, but don’t have to.

WHAT IS PLANNED FOR THE 25.07. AND WHY SHOULD WE ALL TRY TO GET A TICKET? Benni: The next KaraUke on July 25th is the first KaraUke after the Corona-Lockdown. And it’s our first Open Air Event ever, so we are really excited about that. It takes place at the 11er Rosenau Biergarten which has a capacity of 100 people. Everybody had to get a (free) ticket because of the capacity limit. After two days we were sold out. But we are planning a few more Open Air KaraUke events this summer and even in autumn. Nobody knows how indoor events in the colder time of the year will work out, so we’re trying to get outside as much as we can. So follow us on facebook (https://www.facebook.com/KaraUkeAugsburg) , Instagram (@karauke_augsburg) or meetup and you will be updated about our upcoming events.