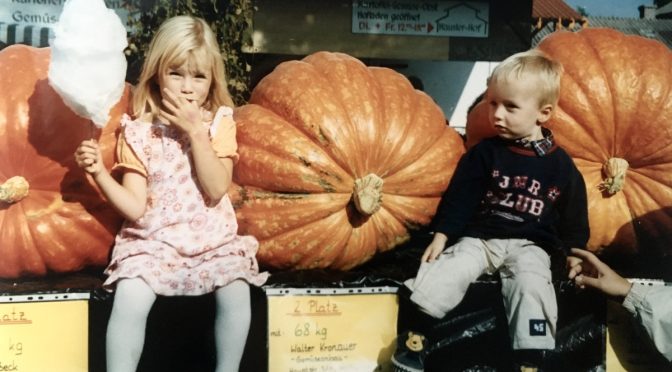 It happens in less than a second… a bee flies close to my ear making its typical buzzing sound and (swoosh) I´m back to a past situation in my head. It´s a hot day in late summer, I´m in my grandparents’ garden in the east of Germany for the holidays, my granny has just made her delicious plum pie and maybe in the afternoon we will ride our bikes to the beautiful lake in the forest around the corner.

Wonderful trick of the brain

It happens just like a reflex: you smell, hear or taste something and it reminds you of a situation in the past. It´s like a moment you caught and put into an empty marmalade jar, only to open it up again and get a whiff of the feeling you had at this time. Just to name another few examples: I love the smell of gasoline. Not because it´s a fancy perfume, but because it reminds me of my childhood vacations. Going on a camping trip in Italy by car, being stuck in a traffic jam, excited for the next two weeks just enjoying life. Same goes for the sound of pigeons, which I always heard when I woke up in the tent.

The taste of milk chocolate – for me also an association with being a child. My first advent calendar, a Milka chocolate bar as a present from relatives or a piece of the typical Easter chocolate bunny. I take a bite and I feel like a little girl again. Another amazing thing: the smell of old books… or new books, as well! As for the old ones, their smell takes me back to rummaging in a library or my parents´ bookshelves. The smell of new books always brings excitement to me: like when you got a new book for your birthday and could not wait to start reading, or when the new year of school started and you were still excited about what would happen during the year (motivation was still existent back then).

Bringing childhood back to the present

I could probably go on telling you other examples for eternity… The smoke after you blew out a candle (on your birthday cake), the sound of a cow´s bell, the smell of French fries, the feeling you get when you coincidentally smell the soap your grandma uses as well, the scent of sunscreen or the taste of cotton candy…

All of these things bring some kind of joy to our minds because they remind us of happy moments that are already gone. Maybe in hard times we should remind ourselves of those smells, sounds or tastes and try to get a glimpse of them. Just to get the feeling of being a child again, when the worst thing that could happen was having to take a nap (now the most amazing thing ever!) and the best thing was eating French fries next to the pool.

“Thank you for your service, Sir!” – That’s a sentence I’ve heard probably about almost 100 times, when I was out with my host dad and him wearing his US Army uniform. What seemed incredibly weird for me at first, was very normal for people living in the Unites States of America. Being in the Army or any other military unit in the USA is something highly respected among its citizens, which I started to realize quickly after moving in as the au pair of an Army family.

Before I started my year as an au pair in 2016, I of course knew that most of US citizens are pretty patriotic and that they love their country and everything what it stands for. But when I actually started living there, I realized that there is much more to it than loving your country. It’s a way of living, which especially shows in how they treat people working in the military.

So, my host dad who has been working in the Army for about 30 years, brings my host family a lot of advantages. Especially when we were going out together for dinner or visiting an amusement park, they always got a huge military discount. When we did go on a trip, we always were able to board the plane priority, because of my host dad being in the military. I also found out that there actually are certain camping grounds and hotels, that you can only go to if you are in the Army. Besides all this, I also noticed the second they realized my host dad is part of the US military, we always got special treatment and regardless their age people showed so much respect towards him. That’s something that I got fascinated about, since I’ve never experienced such behavior towards people in the German Bundeswehr.

Of course, besides the discounts and all the respect, there are some things that are far away from being perfect, when you are a military family. The hardest thing my host family probably has to face are the ongoing goodbyes.  I don’t even know how many times my host dad had to say goodbye to his loved ones to go on another military mission. He was not able to be there when my host mum gave birth to their first child and he missed a lot of special occasions. And I guess it’s even harder, when you don’t know if you’re going to see each other again or not. When I first got there my host dad was only able to stay for two weeks until he had to go back to the Middle East.

Respect for the military

Regardless of all the advantages and disadvantages working in the US military, I found the lifestyle and how much respect the US military gets fascinating. It’s part of the country and history and people realize how hard it must be to have a job like that. Of course, you can discuss whether the military is really needed, but at the moment it exists, so why not treat the people working for it with the right amount of respect. Something we in Germany probably could learn from.