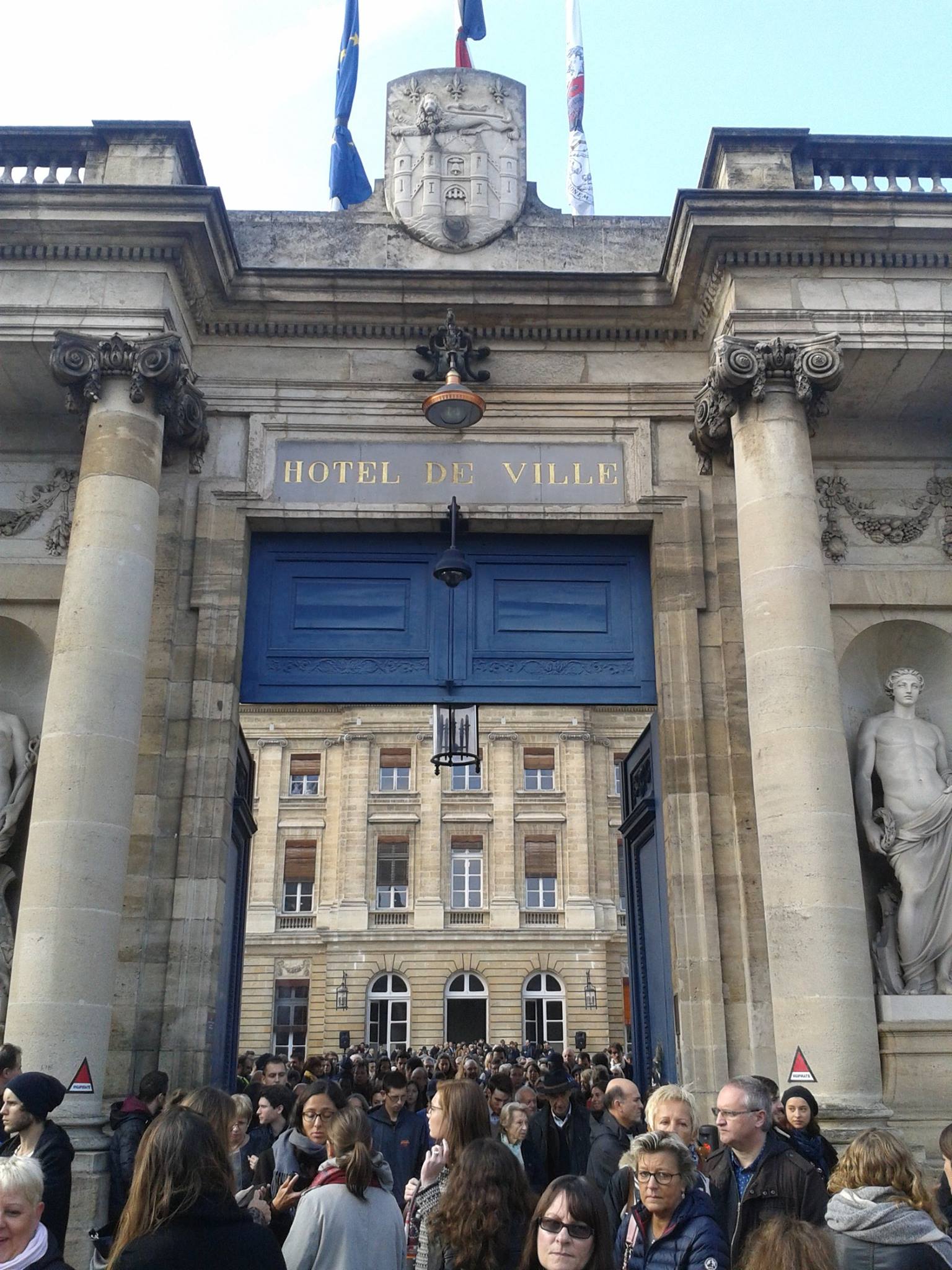 What is it like to live in a country in which a state of emergency has been declared? How do the people of a country whose capital has just been struck by the hardest massacre since the end of World War II feel? In the middle of a catastrophe, how does a nation find its way back to normality? Many questions and the desperate search for answers… The only promising thing about this leaden Monday morning with its grey clouds hanging deep down over the city of Bordeaux is probably the fact that the working week is about to start and the certainty that a lost weekend in November has finally come to an end, although it never really seemed to end. The first day of trying to win back control of everyday life falls on the second day after the state of emergency in France has been declared.

Personally, I was not in the mood to choose the usual way to university today. Instead, I decided for an unexpected encounter with a large crowd of people standing in the forecourt of the Hôtel de la Ville, the city hall in Bordeaux. At midday, the governing mayor invited every citizen to assemble for a minute’s silence at the seat of the ninth biggest town in France. On this 16th November thousands of people are coming together at several places in Bordeaux and all over the country to remember the victims of an incomprehensible tragedy. Three days after a bloody series of terrorist attacks in the French capital killed more than a 120 innocent people. On my way to the ceremony, I made a short stop at the Place de la Bourse. Letters of condolence, flowers and colorful banners with various slogans like “Pray for Paris”, “Not afraid” or “Keep calm” have been put down in front of the big fountain on the place. A young man was carefully re-lighting the candles which have been blown out over night. I asked him for the lighter, feeling a bit embarrassed about the little tea light I had in my pocket though. Despite it being the moment of the worst heartache, I want to feel with the country and its people I‘ve come to love in the short time I have been living here. I came to France as a stranger for my Erasmus Semester. During the last three months I have become a child of Bordeaux, studying, enjoying and loving life like everybody else in this beautiful town. I lit the tea light and put it down beside the other candles forming the omnipresent and almost fateful five letters – Paris.

Shortly afterward, I was going past a newspaper stand next to the town hall. The latest issue of the French daily Le Monde was grabbing my attention. Its cover all in black showing two crime scene technicians covering a dead body. One phrase is enough to tell the reader what was going on: „Vendredi 13 novembre, 21 h 20 – La terreur à Paris“(Friday, 13th November 21 h 20 – the terror in Paris). I took the newspaper and put it on the counter. „Deux euros vingt, s’il vous plaît“, said the seller, probably just about to stop his work for the minute’s silence. His eyes were filled with tears. I don’t know if he‘d lost someone in Paris who was near to him or if he knew someone who‘d lost a friend or family member. Nobody knows. It’s all but certain that at least a part of the „bordelais“ (that’s the French name for the people who are from here) are directly affected. Just when these thoughts were crossing my mind, I got a message from a friend telling me that her art teacher from uni was among the victims of the massacre in the Bataclan. Silence.

I began to read the first few lines of an article on the front page of the newspaper. In fact, it’s a report about the night by the journalist Florence Aubenas. Boulevard du Montparnasse, in Paris, people are leaving the cinema, small happy groups. It’s almost midnight, they have not been informed yet. On the pavement, the others are turning back to them. Someone says: „Shush“, to two young girls who are laughing loudly. Suddenly they realize that the crowd around them is touched by a particular gravity. „What has happened? We went to the cinema and when we came out, everything has changed“.

This reminds me of my personal night on Friday. I also went to the cinema with some friends to watch the new James Bond movie. Obviously a genre which is principally known for a lot of violence, shootings and explosions. Right after the movie had finished, the first people in the cinema found out on their mobile phones about what had happened in Paris. Immediately I thought of two of my best friends from Bordeaux who wanted to spend the weekend in the city of love. A short glance at my mobile phone and I knew that they were safe. A feeling of relief. Nevertheless, I understood that the love must suddenly have disappeared in Paris, replaced overnight by fear, panic and shock. The violent scenes of a fictional movie have just turned into reality in a city which is not more than five hours away from here.

After my friends and I spoke to our loved ones at home, assuring them that we were alright; we decided not to go home racking our brains about the occurrences but to go to a pub and taking a schnapps together. In the pub, some of the people around us were already drunk and probably didn’t notice anything from outside. The work flow behind the bar just carried on, enormous amounts of beer were filled into huge glasses and the music kept on playing. But what should you do in such a situation? Remind everybody of what has happened? Should the bartender have closed the pub, telling everybody to go home?

Two days after, on 15th November, the French government declared a state of emergency for the whole country. Suddenly the wonderful, free city of Bordeaux is affected by the same drastic measures which are in fact all too logical in a situation like this. In the days after the terrorist attack the number of heavily-armed policemen has been increased visibly in the city centre, the tram stations have been provided with the warnings that all passengers should be on their guard while moving freely and the municipal government has advised the citizens not to gather together in bigger crowds of people in public.

Suddenly the three keywords of the French identity „Liberté, Egalité, Fraternité“ are torn apart. Our values which the terrorists hate the most have all changed. It seemed as if the terrorists have achieved their aim, before we, the people, could have responded at all.

Back in the forecourt of the „Hôtel de la Ville“, it‘s almost 12 o’clock. It is the same picture as the last days in town. Several policemen are guarding the entrance of the city hall checking everybody’s clothes and bags. I’m one of the first in the forecourt waiting for the mayor of Bordeaux who will deliver a speech here in a couple of minutes. Little by little, the court fills up with more and more people standing behind me. I turn around and look at partly mourning, partly stressed faces. It is an atmosphere of sorrow, speechlessness and composed silence when the mayor finally walks onto the stage with party members of the municipal parliament. „Hate, hostility and terror; that is the Daesh (IS). Liberté, Egalité, Fraternité, these are our values, not only for France, but for the entire western world. Together we will defend our values“, states the Mayor in his speech. „Of course, he’s right“, I think. Another thought contradicts this, though: „If everything were as simple as that,“ or „who actually started the war in the Middle East?“

I talk myself into thinking that these questions don’t belong here, not today, on a day when the calm reflection of a tragedy and the remembrance of its victims has priority. One minute of silence. Then the mayor calls people to sing the Marseillaise, the French national anthem. A totally uplifting, goose-bumps-like moment in which I catch myself singing lustily the first few lines until I come unstuck over the following: „To arms citizens – form your battalions – march, march – let impure blood – water our furrows. “This magnificent anthem with its wonderful melody doesn’t hide the fact that it expresses words of violence and war, at a moment you’re praying for peace and harmony in the world, not only here, but in Ankara, Beirut and Sinai. The fact that the French President, Francois Hollande, said only the day before „we are in a state of war“ and that the French army recently started to bomb IS positions in Syria gives the ceremony a bitter aftertaste. Am I the only one here who doesn’t want to admit that we‘re already in a state of war with an unknown, abstract power?

Either way, my eyes fill with tears at the moment when a thousand voices behind me are chanting „Marchons, Marchons!“. I’m back in my right mind  –  I’m sure the anthem must have the same meaning for them as for me. Today I’m a Frenchman, now more than ever.