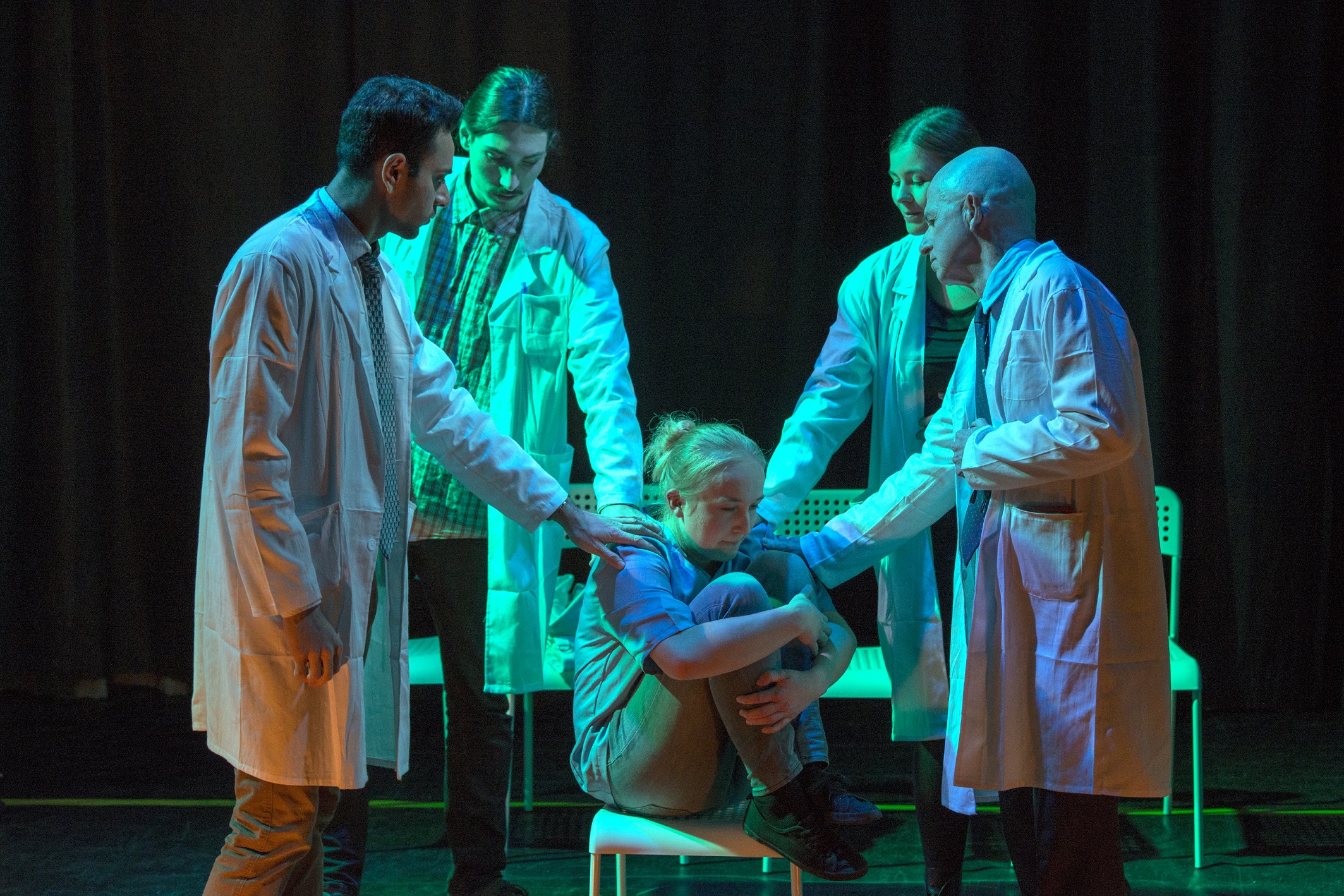 Since today’s the last chance to see the University of Augsburg  “Anglisten Theater” perform “4.48 Psychosis”, I thought I’d share my experience of the premiere last Thursday (December 8th).  It’s the last play written by its author Sarah Kane, and tells the story of a young, mentally ill, woman. I actually can’t sum it up in more detail, since the main point of this play is that what you see isn’t 100% clear. For example, if you watch A Mid-summer Night’s Dream, you have a clear storyline to follow (they’re in love, they flee, chaos ensues, they get back together, happy end). You also have clearly defined characters with their own traits, which you discover while watching or reading. But 4.48 Psychosis doesn’t provide you with such things. Personally, I wasn’t entirely sure about anything. I was constantly wondering. I was wondering if the doctors really treat her like that, or if it’s just how she sees them treating her. I was wondering if some scenes actually happened, or if they were just a product of the patient’s imagination or even dreams. I was wondering what might have caused her to feel so bad in the first place…

I was wondering so many things that I was enticed into the play. Even though such “heavy” theatre isn’t usually to my taste at all – I was sad when it was over. Actually, I could’ve kept on watching it for quite a while, and left the theater (or in our case Hörsaal 2) with a bit of a heavy heart. But the fascination I experienced was not only as a result of the play itself. Because, as we all know, no matter how good a play is, if you have bad actors, it’s worth nothing at all. Fortunately, the university has some amazingly talented students. They were all brilliant, especially Anna Hilbel, who did a fantastic job in the lead role. The amount of text she had to learn was incredible (trust me – there’s  a ton of really long, hard monologues in this one), and I was amazed by the feelings she puts into her performance. I believed EVERYTHING. I believed her anger, her despair, her love… everything. At this point, I really have to give credit to Mr. Beck as well, for directing and coaching. The play allows every director a lot of freedom to make it theirs – and he nailed it.

So if you’re still unsure…. then I don’t know what else I can say without giving away too much. Just take my advice. Go see it. You won’t regret it. And, for my part, I can’t wait to see what they’ll be doing next semester.