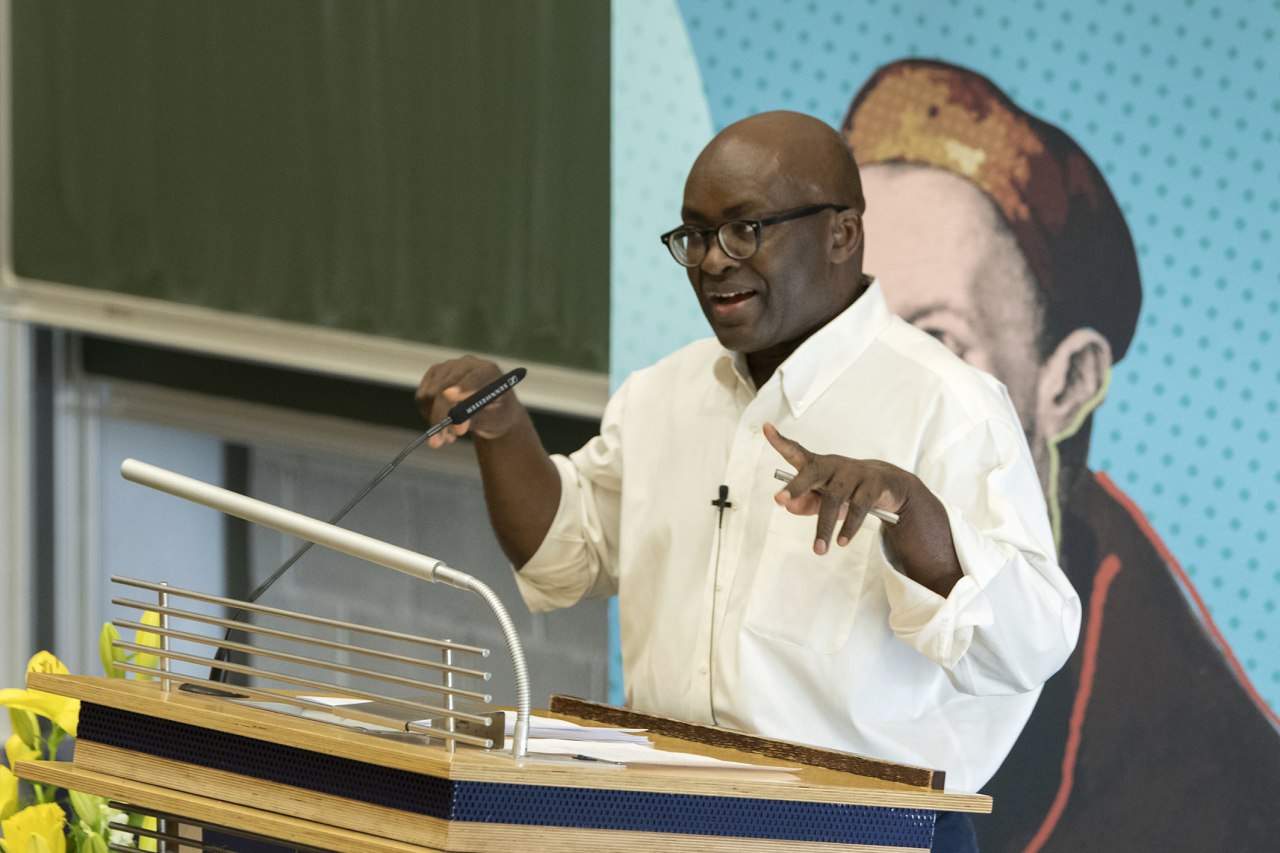 Welcome back. We know you’ve swallowed the entire first part of this interview within a few minutes. Go get a drink and do some intellectual push-ups for warming up. There’s more to come.

Katharina: “You are not only a famous philosopher, but also a famous author. How do you connect philosophy and business?”

Achille: “You see, I wish the business part was mine, but unfortunately it’s not. The business part is for the publishing companies. No, I’m joking. Frankly, I don’t know how a book comes to be read by many people. What matters, as far as I am concerned, is that you choose to do something and you do it the best you can. You find joy in doing it. You don’t regret, once it’s done, that you could have done it this way or another. And when you reach that state with work, with a book, with writing, you let it go.”

“You let it go because you have equipped it with the resources for it to travel by itself. The moment you release it, there’s nothing you can do. It travels its own way, it speaks to people or not, it will sell or not. These are decisions that are beyond your control. What I am interested in, the moment I release my work, I ‘set it free’, is knowing full well I have done the best I could. And your satisfaction comes from the knowledge and the conviction that you have done the best. That is what matters to me. Questions of reputation or money are not really the way I conceive of all of this.”

Niklas: “You get paid in self-respect?”

Achille: “Exactly. Your payment is the level of self-respect you think you have gathered through your work, your dedication and the joy produced in the act of writing. I think, if you do not find joy in what you’re doing, you shouldn’t do it, you should abandon it. So in that sense, I think you have to find joy in what you do, not caring about others. And you have to allow people to take your work in directions you didn’t expect. That’s how it speaks to them. If it doesn’t speak to them, it just means it’s not a successful piece of work. The process, on the other hand, is about joy and freedom, if you ask me. In whatever one does, how does one achieve or experience these two affects?”

Katharina: “Do you think your books are received differently in the West than in Africa?”

Achille: “Yes. And in fact, they are received differently in different places within the West. For instance, the book called Critique of Black Reason was received very positively in Germany and in a lukewarm manner in the Netherlands. They didn’t like it. There are always different reactions. For example, On the Postcolony, a book I published in 2010, was basically ignored in France, even though I wrote in French. And then it had a magnificent reception in the US. And only after that, the French public began to care. But the book has never really made the kind of impact it had in the Anglophone in France or the francophone world. I think, in the case of France and On the Postcolony, people in France didn’t know what to do with it.”

“This was partly because, in the academic world in France, people are still extremely stuck within specific disciplines. If you are a historian, you act and write like a historian. If you are a sociologist, you are only that. There is not much interest in interdisciplinary research. And the book was very interdisciplinary. So they did not know how to classify it. And I also think the style of writing was not academic enough in their opinion, nor was it considered to be just public writing. It was a hybrid form and the French did not know what to make of it. But in America, then, it received respect from many different directions.”

Niklas: “What authors do you read? And I am not talking about research papers, but books you read for entertainment.”

Achille: “I read novels, mainly. Lots of novels. French contemporary novels, African novels, Chinese and Japanese novels. A lot from Latin America, but not that much from the US or England. The choice is huge already, but I think I should probably still expand it…”

“I also listen to lots of music, all kind of musical forms. I watch too much soccer, I’m almost an addict. I also cook, which is very good for meditation. Cooking is a fantastic exercise. Or running on the grass. I don’t go to the gym, I go running and playing soccer, on the open air.”

Katharina: “I’m sure you know Chimamanda Adichie. She talks about the concept of the single story, and how, growing up in Africa, she used to read Western literature and how it influenced people in negative ways, how it made people write novels that were Westernized, rather than Africanized.”

Achille: “I have a feeling that this might not be entirely true for all of us – an African writer writing in French would not say it. This might be a very anglophone problem. Writers such as Alain Mabanckou or Kossi Efoui wouldn’t say it, because they would not have the same idea on what being ‘African’ is all about. They would not see a clear-cut opposition between African things and Western things, not in the same way as Chimamanda does.”

“In their writing, there is much more fluidity between different spaces, much more playfulness with, for instance, the French language, much more mixing of forms, much more – to use the title of your magazine – respect for ‘misfits’. And this is what makes their styles extremely fluorescent, extremely luxurious, extremely playful, too. What is really interesting in this kind of work is the degree to which they are willing to combine things we do not usually combine.”

Niklas: “Talking about things that aren’t usually combined, you come from a country that people like to refer to as a ‘third-world’ or ‘developing’ country. We are from Germany. Few people would name our countries in the same sentence, one directly after the other. So how do you think, generally speaking, cooperation of richer and poorer countries could be improved, for mutual benefit?”

“I think, this investment in ignorance is so big because ignorance allows you to be irresponsible and still act in good conscience, even if the results are catastrophic. It seems to me that the West is invested wilfully in massive ignorance in regards to the rest of the world. Because only wilful ignorance allows the West to act irresponsibly. So if we want to change the system, we have to know a bit more. And that is possible – the knowledge is there and it is accessible. There is no reason why anyone, anywhere in the world, should be ignorant about others. Just do the work.”

Katharina: “When we talk about postcolonialism, we often mention how language divides people, how the way we speak about Africa, for instance, is completely different from the way we speak about Western countries. I’m going to be a teacher – how will I teach my students not to be ignorant, not to divide the world through language?”

Achille: “You see the material is there. One of the beauties of the new technologies is that they have helped the world to build new libraries, metaphorically speaking. And these libraries are mobile, they are portable, they are accessible. The Internet allows us access to a multiplicity of documents, of data, of facts, that, if used, would probably unleash the making of entirely new forms of knowledge – images, videos, sounds, documentaries, photographs…”

“So the material is there. The key is to organize it and use it in a pedagogical manner, so that it responds better to the expectations of our times. The material exists, but our thresholds have increased because of the high exposure to technology. So we need to pull people out of their own ignorance and unlock their sense of critical reading of these materials.”

Niklas: “We would like to thank you for the interview.”

Achille: “It was my pleasure.”

(This text has been edited for clarity and length)