I am a 20-year-old woman and, until a couple years ago, I’d never been confronted with real- life inequality. And of course, in school I’d learnt a whole lot about problems like racism, gender inequality or lack of human rights. But I’d never witnessed anything that comes near those things. I’d never experienced different treatment because I’m a girl. And so, for a long time, I was convinced that, nowadays, people understood that every human being, no matter what gender, religion, skin color or origin they have, is equal. I thought that, after all we’ve learnt about slavery, oppression, and all the awful things that happened in the past, people would be smarter. Or at least more reflected.

Before I decided to write this article, I wasn’t a – trigger warning – Feminist. I was in fact annoyed of girls who called themselves Feminists because I didn’t understand what that was supposed to mean. I thought: “Why do I have to hate men just because I am a woman? Why should I stand up for one side, if that side is just as wrong and discriminatory as the other side?” I love shoes and lip gloss and dresses, but also sports and I like hanging out with my boys and girls on the weekend. So I couldn’t be a Feminist – I’m way too liberal for that, aren’t I? And I’m way too girly for that, right? Well, I started my research for this article by looking up the definition of the term “Feminism”: apparently, Feminism is ‘the belief in social, economic and political equality of the sexes.’ I was confused. That was exactly what I want and what I believe in. Such a reasonable attitude and movement! So how could I end up with such a bad opinion on Feminism?

Has “Feminism” become a swearword?

It turned out I wasn’t the only one associating ‘Feminism’ with negative terms like ‘man- hating’ and ‘reversed discrimination’. Way too many people have this dangerous half- knowledge or simply don’t see how ‘Feminism’ should fit into its definition. A male Anti- Feminist said: “There are way too many different shapes of feminism nowadays. It’s not simply about gender equality anymore, it’s also a distorted self-image of women who exploit the role of a victim”. Now I was angry. I couldn’t understand in what way women should be exploiting oppression. I felt furious – how could he, as a man, dare to talk so negatively about something he’d never had to experience? To get less respect, just because of his gender. I mean, my life had been cozy, too, but at least I was willing to get informed, right?

Wait, so men have feelings, too?

So I had a look at the statistics he mentioned and was shocked. For instance, in India, male suicide rates are nearly twice as high as rates for women. That’s because not only women suffer under gender prejudices. Maybe women are expected to be housewives and mothers, look pretty and shut up, to not take part in politics and economics and not have a real job or a career. On the other hand, many men feel they always have to be strong and successful; they have to be insensitive cavemen who earn the money and take care of their women and children. So men around the world are under this enormous pressure to never feel overwhelmed or sad, but to be ‘the man’ in the house.

Do we need new names?

The word ‘Feminism’ only contains reference to women. That’s because it used to be a movement to secure that women get to have the same rights as men, e.g. to vote or to work. And maybe in the past that reference to only women, to clarify that women are equal to men, was necessary – and easily understandable. But not anymore. There’s still a long way to go, there still are women who can’t decide for themselves and don’t have the rights we might enjoy in Germany. And for those women, we still have to fight. But while we fight for women’s equal rights in other cultures, we should not forget that feminism also means that men have the same rights as women. It’s not a shame to be vulnerable or shopping-addicted just because you’re a man. And it certainly doesn’t make you less manly. Just like women don’t want to be called less feminine because they’re athletic, men probably don’t want to have to prove their ‘masculinity’ all the time. And men should be allowed to get the same time for paternity leave as women get for maternity leave. Because – guess what – men love their children the same way women do. They deserve to spend the same amount of time with their kids as mothers do. So, yeah, I guess I am a Feminist after all. I believe in equality as well as I believe in individualism. In the future, Feminists of all genders will hopefully fight for men’s rights as well as for women’s rights. We can only hope that people stop valuing each other differently, just because of their gender. I hope that people once again start to work on their understanding of humanity and see that no one is worth less, because of their individual traits, be it gender, home country, religion or god knows what. 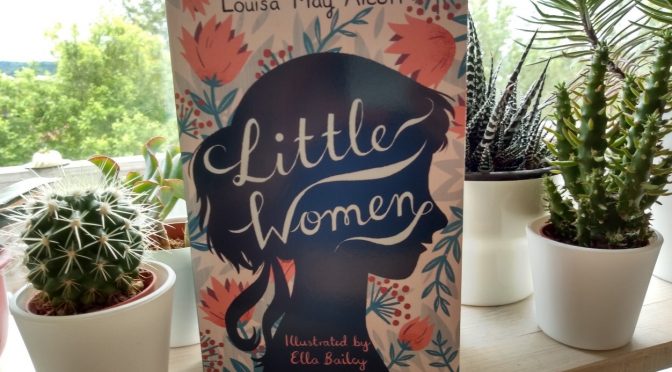 „I just feel like, women, they have minds, and they have souls, as well as just hearts. And they’ve got ambition, and they’ve got talent, as well as just beauty. And I’m so sick of people saying that love is just all a woman is fit for. I’m so sick of it!”, Saoirse Ronan says with tears in her eyes, “But I’m so lonely.” Now I’m also crying. In case you’re wondering where this quote is from – it’s Greta Gerwig’s Little Women. The film hit US cinemas on Christmas Day last year, was nominated for seven Oscars and finally came to Germany in late January. Since then I’ve actually watched it twice at the movies, that’s how good it is.

Originally, Little Women is a children’s book by Louisa May Alcott that first came out in 1868 and received a second volume a year later. The book is considered a classic and has been filmed and re-filmed several times. Even though it came out forever ago, I managed to get half the people I know hooked on it. Here’s why you should do the same.

“Just because my dreams are different than yours, it doesn’t mean they’re unimportant.”

Little Women tells the tale of the lower middle-class March family: the father is away fighting in the American Civil War, and mother Marmee takes care of their four daughters by herself. The Little Women couldn’t be any more different in personality and life goals. The second volume Good Wives portrays them as young women who are trying to accomplish said goals.

There is Jo, an aspiring writer who does not want to get married. Yet, she has to come to realize that everyone around her seems to be changing: her family and friends all grow up, think of marriage and children and she keeps clinging to the past.

Her youngest sister Amy was probably the least liked sister to most readers prior to the 2019 movie. She’s an artist-to-be, at times annoying and vain and has her mind set on marrying rich. The movie actually manages to turn her into a fan-favourite.

The oldest sister Meg is more of a romantic – she gets married at a very young age and faces the kind of problems you would expect: child keeping and making jam. The usual.

Last, we have Beth. She is a very shy character and is the kind soul of the family. Luckily for her, she is always supported by her sisters and they would all happily throw a punch for her.

The movie very beautifully combines the stories from their childhood and alternates them with the ones from their adulthood. The flashbacks are tinted in warm, rosy colours, whereas the present ones are rather blueish and cold. This alternation manages to bring together innocence and growth, as well as optimism and reality.

“Girls have to go into the world and make up their own minds about things.”

Little Women in itself is a timeless story, especially regarding its themes and topics. For one, you have a differentiated portrayal of feminism, which is even more amazing considering that the book was written in the 1860s. It will positively break your heart (to quote my brother at the movies, crying: “You should have told me it was going to be so sad! You can’t let me watch this without warning me first!”).

Another theme is the whole growing up business. You know … the one you’re probably also trying really hard to figure out. There’s this movie scene where Amy says “I’m a failure” and Laurie replies “That’s quite a statement to make at twenty.” The story reflects really well the struggles of becoming An AdultTM and figuring out who you are, while also dealing with a constant shortage of money, time and sleep (please tell me it’s not just me).

The film manages to literally convey all of this in two hours. Yet, if you are still doubtful about whether you really need to watch the movie, let me mention the cast – a movie that has Emma Watson, Saoirse Ronan, Florence Pugh, Timothée Chalamet and Meryl Streep should be worth watching regardless of its content. And I stand by that.