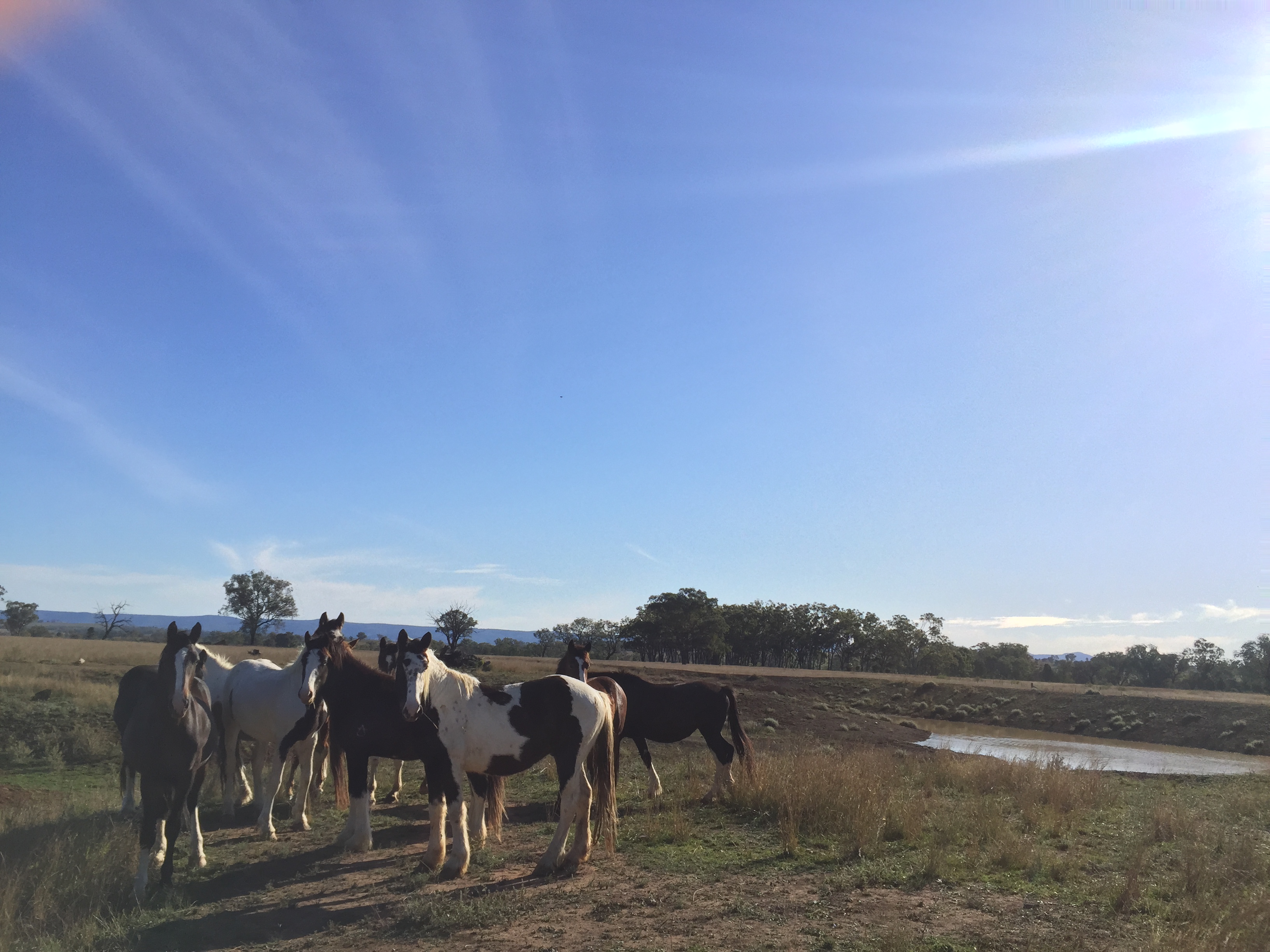 During my backpacking time in Australia, I decided to do some real Aussie stuff and get an insight into the jackaroo/jillaroo lifestyle. A jackaroo/jillaroo is somebody who lives and works on a sheep or cattle station – and well, there are about 70 million sheep in Australia, but only about 23.6 million people! Online, I found this horse breeding and sheep station farm near Bingara, in the northeast of New South Wales, called “Garrawilla”. After I had contacted John and his girlfriend and helping hand Natusha, I booked my train and bus tickets, packed all my stuff, and was definitely ready to go on an adventure!

I was warmly welcomed at the bus stop by John with “Hello, my little German!” and after we had had dinner together with Nat and Jorjah, a jillaroo-to-come, we drove to his farm, pretty much in the middle of nowhere. The next day, after a good long sleep, I finally saw where I would be living for the next few weeks. Surrounded by large fields, hills, and about 400 horses scattered everywhere, Garrawilla began to make me feel tiny, really just like the “little German” I was/am?, apparently – it was just so huge! After our typical porridge and coffee breakfast on the terrace at about 8am, John and I usually started work (which didn’t feel like work at all) by driving the horses to the yards with his ute (a four-wheel drive pickup), his not-always-working motorcycle or quad. You know, it takes quite a lot of courage to stand cramped together in between 30 horses, only holding a stick to guide them to different places (I think my heartbeat was about 200 the first few times!). By telling me all his stories about his family and friends, his various jobs on the farm and all the bloody Germans he’d met, John taught me many useful, important things about how to treat horses properly. He always illustrated his wisdom with real-life examples: often myself. I can tell you, getting dirt smeared in the face or being poked in the bottom with a pencil is not the nicest way to start your day! For the next few weeks, we would make young horses used to wearing a halter, teach them to lead and give and also get them to have a saddle on for the first time. Breaking in horses was one of the main tasks on the farm. Apart from that, we did some fencing (a pretty hard job, really), drove in and sheared sheep, fed all his working dogs and rode the horses, of course!

John also offers tourist rides in town along the Gwydir River, but we also did a lot of horse riding on the farm itself. Not only to check on the horses in the fields and hills, but also to drive them in or teach them to be ridden. But the greatest feeling was cantering across the Gwydir River, water splashing everywhere and the wind blowing in my hair.

Then, at some point, I didn’t feel touristy or foreign anymore, but I had found a place that felt like a second home. My inner cowgirl had found her own level. On Garrawilla, you get that once-in-a-lifetime experience with great people and amazing things to learn, and, as John told me when we went on our first ride: “As long as you don’t break your neck, you’re gonna be fine!”

If you want to collect memories like these yourself, visit their Facebook page: Jackaroo Jillaroo Down Under.