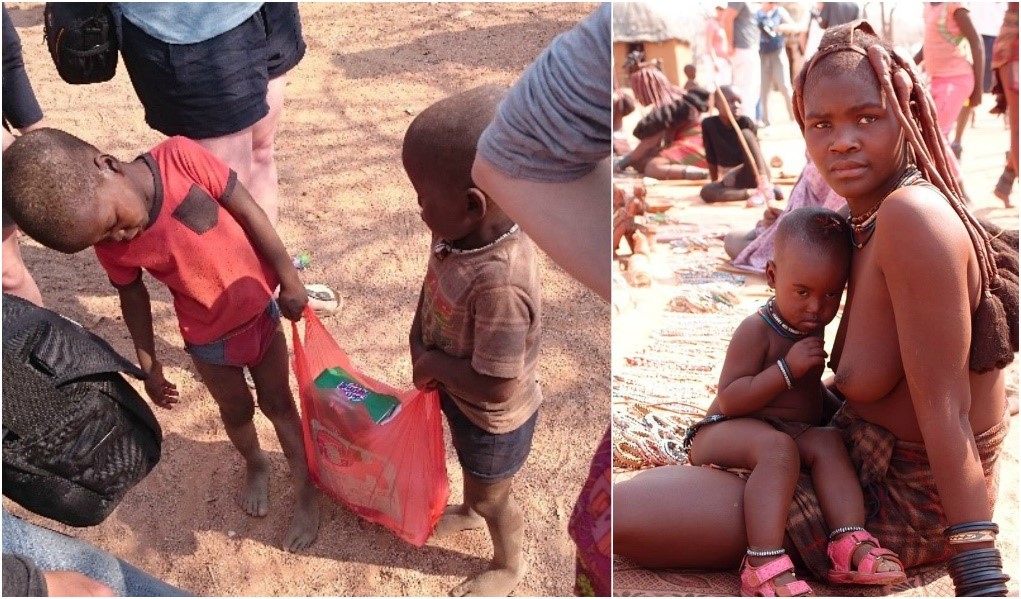 My first – and let’s be honest best – highlight from Namibia was the Etosha National Park.

As our tour started, the first thing we did was to drive five hours from Windhoek to Etosha. On the road, we had lunch and I tried not to freak out because I was so damn afraid of malaria…

Our first game drive through the park became very exciting pretty quickly when we saw the first elephant. I took about a thousand pictures and was convinced that this was the most beautiful elephant I’d ever seen and will ever see. We also saw a lot of springboks, antelopes and kudus, which honestly weren’t as appealing as a 2.5m elephant. When we arrived at our camp site, our first mission was to put up our tent named “Giraffe”, which turned out to be quite a challenge. Slowly but surely with the help of our guide “Doctor” we managed to put it up and were ready to have dinner at the camp site. Then that night we spotted elephants at the water hole and were seriously ecstatic. However, the night was extremely cold and I didn’t think I would survive the next eleven days of camping.

Luckily, I didn’t die that night and even woke up around 5:30 am for a one-day of game drive through the park. It was super interesting and quite an adventure, but to be honest, after a while, I did get a little bored of seeing the fiftieth elephant or the seventy-third giraffe. Of course, I wanted to see the Big Five (elephant, rhino, buffalo, lion, leopard) but we only managed to see the “Big Three” (elephant, rhino, lion). But favorite memory and the most impressive panorama was seeing the biggest group of elephants with their cutest young ones at the water hole at our lunch site!!! On our way to Swakopmund, we also visited a Himba community close to Kamanjab and had the opportunity to interact with the people who live there.

In the tribe we visited, the tourists who would like to get a better understanding of the way of the Himba, their lifestyle and their traditions can do so, without interfering with those still living in their natural environment, the “real” Himbas. The income that this specific tribe generates from the visits goes towards the education of orphaned Himba children, a scheme which we were of course happy to contribute to. There’s also a market, where the women hand-made jewelry and obtain a small income.

It was interesting to see their red-clay houses and the Himba women preparing incense as an anti-microbial body cleanser/deodorant and fragrant. We also saw how the women made otjize paste out of ochre pigment to cleanse their skin. But as interesting as the experience was, the educational village did feel more like a super touristic attraction than the Himbas’ natural habitat I was hoping to see. Located in the southern part of the Namib desert, Sossusvlei is a salt and clay pan surrounded by high red dunes. One of the most fascinating places around the middle of Sossusvlei dunes is the Deadvlei. Vlei means a lake or marsh in a valley between the dunes in Afrikaans.

The Deadvlei is a dry lake covered in white clay pan. It’s full of dead trees and the white really stands out against the bright red of the dunes. We also had the pleasure of climbing Dune 45, which is a 170m star dune that’s composed of 5 million-year-old (!) sand. The panoramic view over the dunes at the top is tremendous but let me tell you – the climb is tiring as hell!

Known as the biggest city on the coast of western Namibia, Swakopmund is surrounded by the Namib desert on three sides and the Atlantic Ocean on the East.

As Namibia was once a German colony, Swakopmund is still a very German city. You can hear many people speaking German on the streets and there are lots of German signs outside of cafés and shops.

Numerous activities like camel riding, squad biking and sandboarding are offered in the desert, and you can also go on dolphin and seal cruises or go fishing. The city itself isn’t very big but we were all happy to have a day in civilization after the desert. It was also our only accommodated stay on the whole tour and I was very excited about a soft bed and my own shower!

Cape Town is the most populous city of “the Rainbow Nation South Africa” after Johannesburg. It’s one of the most multicultural cities in the world and is very modern and westernized.

And there’s plenty lot to do there. One of the best-known attractions is of course Table Mountain, which you either can hike up or use the cableway up. At the top, you have an incredible 360˚ view over Cape Town but be ready to stand in a looooong queue on the way up. Another typical tourist attraction worth seeing is the Cape of Good Hope, the south-western most point on the African continent. Not only is the Cape itself a beautiful view but also the roadtrip there is full of breathtaking landscapes.

If you’re strolling around the city near Long Street, I would also advise you to make a detour to Bo-Kaap, a part of the city filled with colorful houses and amazing places to take photos at.

However, in my opinion, one of the best parts of Cape Town, apart from the people, was the beautiful coastal areas like Camps Bay or Hout Bay. To explore the coast, I would strongly recommend you to buy a ticket for the hop-on-hop-off bus, as it gives you the chance to tour the coastline and stop anywhere you want to in order to explore the beauty of the beaches.